by Jad Baaklini and Mira Tfaily

Lack of information is the main obstacle stopping many people from using public transport in Lebanon. This issue, and the fact that this gap in public knowledge has too often been filled with simplistic myth or exaggerated legend, is the raison d’être of our project.

But overcoming this obstacle, in our view, is not just a matter of taking on the role of the cartographic “Godot” we’ve been waiting for; Bus Map Project has been and still is stubbornly insistent on pushing the problematic beyond the quick-fix mentality: if you’re interested in riding the bus in Lebanon, you can either choose to remain an outsider, or you can take a leap of faith and engage with the system to learn about it first-hand, route by route, journey by journey, contributing to a collective map that isn’t dropped from the sky, but rather, has been laboriously tended to, and is chock-full of living history.

Today’s #RiderStory introduces Clément, a French hiker who shares our zeal, and who has taken it upon himself to figure out the system at its very fringes. Building up a library of experiential knowledge, Clément has been sharing his discoveries and tricks on his hiking website, as well as contributing to our collective mapping process. In this post, we reflect on his learning as a way of better expressing our own.

« The Lebanese bus system can seem difficult to access for neophytes, but once you start asking people on the ground, it can be figured out smoothly and little by little. My first time in Dora as a foreigner was quite an experience, but now I get around very easily there, » Clément explains. His first experience taking the bus was on a well-known route, the very busy Dora-Byblos line. He then started exploring lesser-known routes, learning about the system empirically and piecing together the bigger picture route by route. « I was surprised by how little information there is on public transport in Lebanon. One good way of seeing if the system is understandable to outsiders is to see whether foreigners are able to access it or not. I noted that the routes going from Cola to the South and Dora to Tripoli are indeed used by foreigners -– who hear of them by word-of-mouth -– but the rest of the routes are pretty much used only by locals who need the buses to reach their villages or workplaces. »

Clément’s reflections bring up a very interesting “epistemology” or theory of knowledge for a city like Beirut. We often say that our project attempts to make Beirut “more legible,” which is a word that evokes a very visual, or even textual, way of engaging with the city. It’s the kind of engagement described in Kevin Lynch’s “The Image of the City”, a classic in the urban literature. In it, Lynch talks about the « highly imageable (apparent, legible, or visible) city [as] well formed, distinct, remarkable; it would invite the eye and the ear to greater attention and participation…Such a city would be one that could be apprehended over time as a pattern of high continuity with many distinctive parts clearly inter-connected. » We hesitate to try and analyze Beirut by this definition; at the very least, we’d double and triple underline the “over time” part of that sentence. Instead, Clément’s observation of how Beirut’s transit system is gradually apprehended by outsiders through word-of-mouth is an important reminder of the fact that visual representations of a city — like mapping — will miss a lot about how a city like Beirut actually functions. Even Lynch admits that there are other properties in “beautiful environments,” like « meaning or expressiveness, sensuous delight, rhythm, stimulus, choice » — these are aspects of urban life that are too easily sacrificed when the issue of public transport is reduced to a problem of “lack.” As Jenny Gustafsson once wrote in a popular article on ‘mapping Beirut-style,’ « Maps, when functioning well, become an extension of our knowledge » — to which, we add the important caveat: maps can also easily become dysfunctional if they crowd out or colonize other ways of knowing.

Clément’s empirical discoveries allowed him to develop tricks to make the most of the system, and speak in the urban vocabulary and grammar more fluently: « In Dora for example, it is better to stand further from the bus stop and hop on a bus that is already on its way, rather than waiting at the bus stop for a bus to fill up and go. » Another clever strategy is to take a van rather than a bus when going to a far-away place like Tripoli: they fill up more rapidly than buses and hence will go straight to the final destination without stopping every few kilometers to pick up clients. What map can teach you that? Quoting from Jenny’s article again, it is important that transit solutions in the Middle East take seriously the way that MENA cities are actually put together: « It’s about learning how a city works. There’s usually a very clear order; you just have to understand it. » 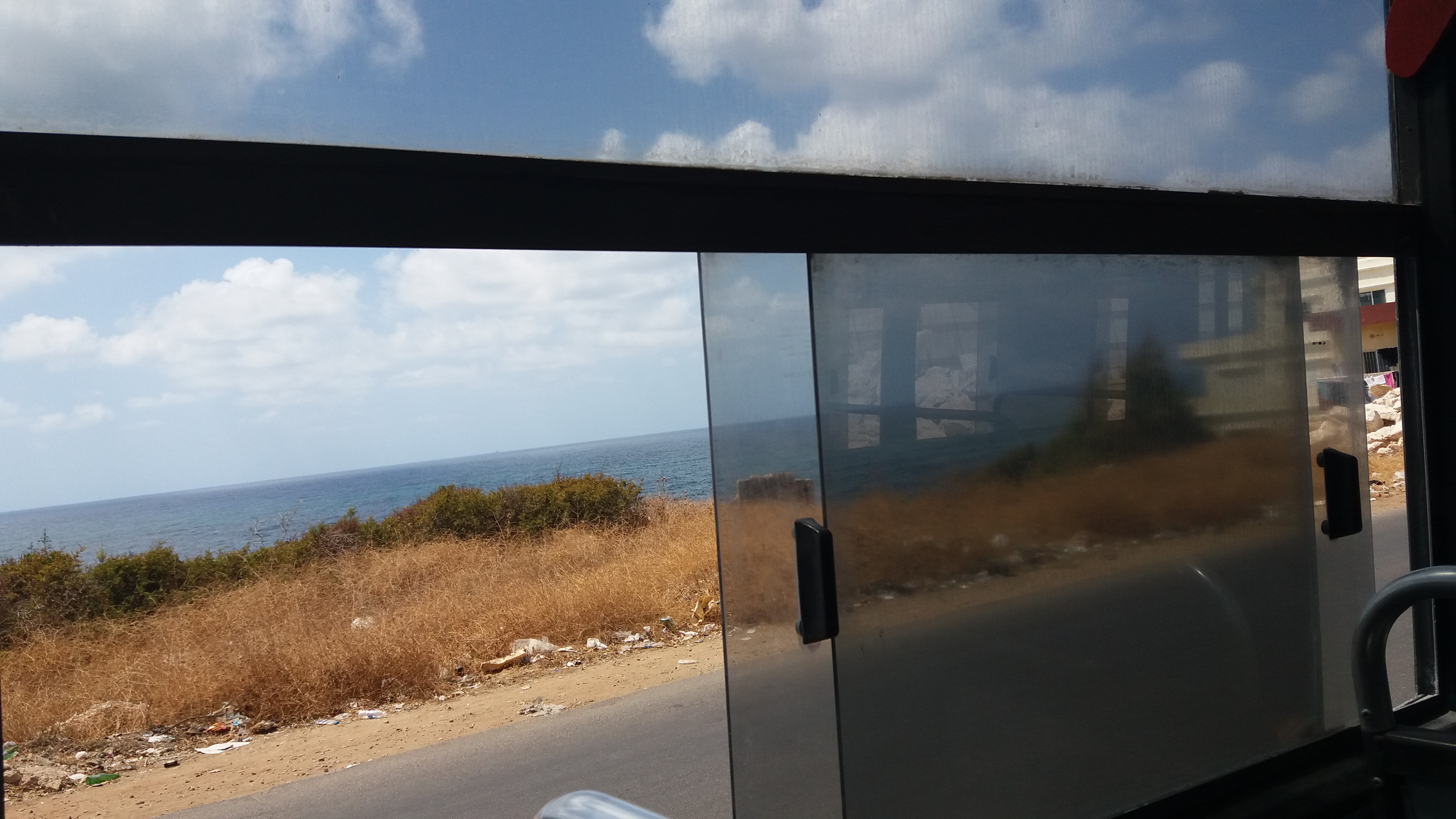 After getting in touch with us, Clément started volunteering his time for Bus Map Project exploring new and obscure routes, tracking the Cola-Niha line for example, among others. « I think it is a challenge to map the informal system because here people are used to orienting themselves differently, with landmarks rather than streets for example. The only map I was able to find was the Zawarib one for Beirut buses. However, I found it quite difficult to use; it looked like a metro map and some routes were outdated, » he explained. The predominance of the metro-style or “Tube map” is not just a matter of aesthetics; it is a deliberate choice to represent the city in a very particular way, one that sacrifices much too much cultural nuance for the sake of supposed clarity and visual appeal. One of our friends who produced a transit map in another city in the region once lamented to us how little their highly-schematic map was being used by the general public, saying that « people here aren’t used to reading maps » — we’d turn that problem on its head, and say, instead, that people here aren’t used to valuing how people here actually are (think, live, and get around). Mapping MENA-style is indeed a very real but worthwhile challenge.

Among Clément’s repertoire of urban tactics was learning to avoid congestion by deftly choosing internal versus external routes to get around faster; for example, hopping on the external Bikfaya-Dora line to get from Sin-el-Fil to Dora. These are tricks that can only be learned over time. « Lebanese people are often surprised when I explain that I take the bus; I’m guessing the lack of information available contributes to unnecessary stigmas such as danger or violence, which is very far from the truth, » he reflected. We’d add that the lack of information is also an opportunity to contribute more intentionally to the city-making we are always already part of — Clément’s tips and tricks are urbanism, no less important for shaping the city than any engineering blueprint or national land transport strategy.

Sensing that he is contributing to something larger than himself, Clément started a hiking website to share his transit discoveries. « I am a hiker and I wanted to explore Lebanon by myself, but I quickly figured out that all hiking websites took it as a prerequisite to have a car to get to the trails. So I started tracking the bus routes I would take using my watch and uploading them on my website. » By documenting his experiences with routes, precise information and pictures, he encourages and equips wanderers of all kinds to experience Lebanon differently. « I am just sharing the information I would have liked to have had when I arrived here in January. The website of the Lebanon Mountain Trail is very complete but does not display any information on how to get to the trails by public transport. The travel agency Living Lebanon gathers some useful routes, but not all of them; it’s the same for the WikiLoc portal. » While a lot of hikers in Lebanon go on organized group tours where everything is taken care of, Clément’s sharing of information is an invitation to explore, learn and document more individually and freely. And in doing so, helps us connect the dots between two engaged, but previously-disconnected communities that #LiveLoveLebanon in the city and beyond.

Are you a transit rider? Do you want to contribute to our project? Email us at hello [at] busmap [dot] me