Did you know that OpenStreetMap has a “Transport” layer for Lebanon? And that people have been adding bus routes to it by hand?
One prolific mapper told us about his motivations and experience:

“I moved to Lebanon in 2012. We did not intially have a car so we relied on public transportation. It was a bit frustrating at first because we did not know where the buses went etc. We eventually found the Zawarib book which has a Bus Map in the back. Unfortunately, the bus map only shows “areas” the buses goes to, which made it very difficult to know what street to go to catch a bus. Many times we waited on a street for a bus only to find out the bus actually goes down a parallel street. Or the apparent crossing of 3 routes in one place, but in reality 2 busses cross in one spot, and 2 others cross elsewhere. 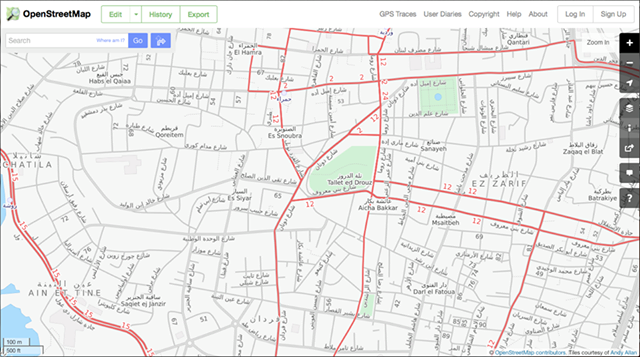 When I first discovered OSM in February 2014, I saw the transport layer had a good portion of routes tagged, but mostly on the West side of Beirut down to the airport and only LCC routes. I had become familiar with more of the east side routes, so I added them. Mostly 2, 7, 8, some OCFTC, Sakr. I can’t remember if I’ve tagged any of 9 or 15. I was quite glad to find OSM and added the routes (or partial routes) I knew. I joined OSM primarily so that I could have a good bus route map to reference that showed routes on actual streets. I am not using GPS, but just my memory from when I rode the bus routes.

Initiatives like OSM, Zawarib and onlinelebanonbuses.com need constant maintenance to keep routes updated. Any grassroots mappers out there who can help?