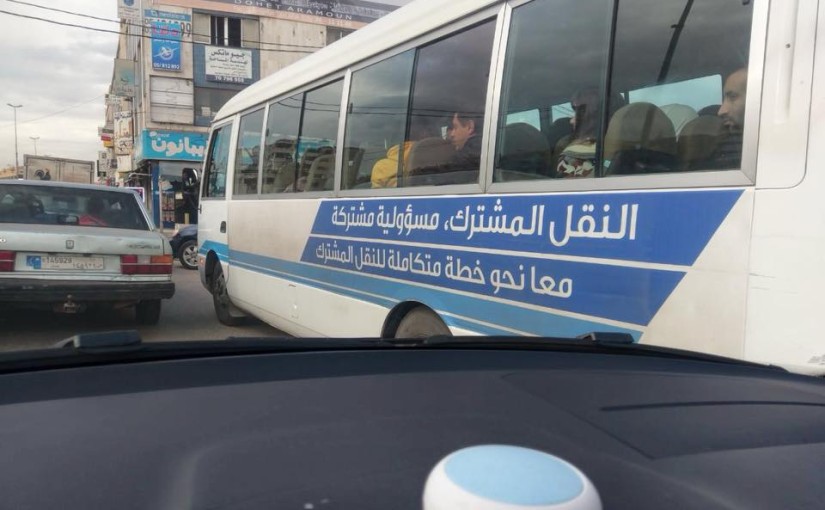 2018 has been very busy for Bus Map Project, and it’s already almost May! It’s time for a catch-up post; we have a lot to tell you…

On January 6th, we held our very first #BusCommunity event in Hamra and had a lively discussion with friends and peers from YallaBus, H2 Eco Design and others from our network of collaborators and supporters. Later that month, we did a mini-collective map action in Tripoli, to familiarize ourselves with the city and plan for more mapping in North Lebanon. This was followed by our first foray into informal ‘guided tours,’ introducing people to Tripoli by public transport.

On February 5th, 12th and 13th, we presented our ongoing collaboration with H2 Eco Design at all three NDU campuses (Zouk, North, and Chouf) and received very good feedback from students and faculty. We were especially happy to hear a real commitment to public transport from the lecturer and FAAS coordinator at NDU Barsa, Dina Baroud! In between, we managed to find time to take part in Beirut Design Week’s Open House, — which we plan to follow up on in June! — and even do a few press interviews (Mayadeen and Al Araby).

How to summarize the purpose of all of this buzz and activity?

The photo at the top of your screen is a good start! Spotted by a veteran and friend in the sustainable transport scene in Lebanon, this slogan on an OCFTC bus very much captures the spirit of our message in 2018. It says: “Shared transport is a shared responsibility. Together towards an integrated transit plan.”

Cynics will argue that this campaign is an empty (and maybe even fiscally irresponsible) gesture that off-loads the state’s actual responsibilities towards the transport sector; while this may be true on some level, we welcome this shift in language, because it breaks the chains that people imagine to be essentially linking “public” to “state-owned,” and “private” to “corporate.” Shared transport is not just an odd Lebanese expression — it’s a potentially powerful concept that can undo a lot of false binaries and help us see the incremental changes already happening (that is, if we allow it to).

In this same spirit, April was the month when a significant milestone for informal transport in the Middle East and North Africa was set. We had the pleasure to be invited by FES to take part in their MENA region’s civil society delegation and attend UITP’s MENA Transport Congress (April 23-25), where two sessions on informality took place, and a working group on informal transport was inaugurated for the first time in the organization’s history.

Under the theme of Pioneering for Customer Happiness, the congress highlighted the concept of Mobility-as-a-Service (which is an idea that has strangely similar characteristics to our very own informal bostas and taxis, if seen in the proper light…), but above all, demonstrated the need for better acknowledging the way that informal transport can be a real partner in our shared responsibility to more fairly share our cities. We have a lot more to say about this, so for a detailed summary of the stakes and problematics emerging out of the push towards formalizing the informal, stay tuned for our next post!